Your Source. For everything. Really. 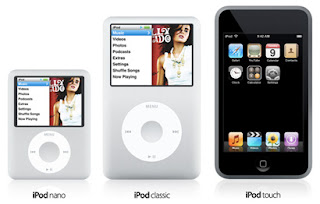 I'm sure my friend Jerjo will hate it, as with all things Apple. Steve Jobs could cure cancer and Jerjo would complain that oncologists, while having worse results, are actually the superior product because, well, I don't know why he thinks the way he does. But Apple today launched a bunch of new iPods and one of them could be huge. The iPod Touch is the revolutionary product, essentially an iPhone without the phone. But don't underestimate what that is. It's a touch screen driven music and video player with full wifi internet capability. Is it just me or does that make it the fist truly pocket computer with mainstream potential? People will be buying an iPod but be getting full access to Youtube, internet radio, email, etc. Geeks have long talked about the move away from computer based software to web based programs for everything from spreadsheets to word processing and this just might be the devise that gets us there. Sure you can do all that from a laptop but who wants to carry one of those around all the time? And sure, someone could come up with a handheld computer that does all this, but why design and market something like that when Apple has clandestinely sold one to people already without their even realizing it?

In the couple reviews I have read the whole Starbucks thing is dealt with as kind of an afterthought, a gimmick that might be neat but of no real consequence. In short, Apple has partnered with Starbucks (which is trying to make a name for itself as a new kind of music retailer) to offer a service in all their stores. When you walk into a Starbucks with your new iPod Touch it will automatically display the song currently playing in the shop by opening it in the iTunes Music Store on the iPod. One click and you can download it to your iPod (and later sync it to your home computer) for the standard iTunes $0.99. Your iPod will also display the last ten songs played in the store and you can do the same with them. Just a clever way to get people to impulse buy songs they may or may not want, right? Think about this, tho. When you go into the store your iPod is instantly trading information with that particular store. If it knows what song is playing it is a snap for it to also know what items are on the menu as well. How hard is it to order your coffee with the same process? And doing so pays for it with your iTunes account. You're bringing your stereo and computer with you but leaving your wallet at home. This is not new technology but it is brilliant in its potential application. A huge chain of stores coupled with a devise that tens of millions of people will have in their pockets may be the critical mass to start the long discussed cashless society. Imagine millions of people buying all sorts of things with just their iPod and all that money flowing thru their iTunes account. I bet this move is not unnoticed in the PayPal offices today. Come to think of it, I bet the credit card companies are paying attention, too. Might Apple do to financial services what it has done to the music industry?

You heard it here first, when the country moves to virtual currency we will look back and say this is where it started. Forget how cool a music/video player Apple has launched, the real significance today is a devise positioned to change the way we live.

[Even as I was typing this it was only slowly sinking in how brilliant a move this was. There are a billion things that are doable with off the shelf technology but are held back because the widespread infrastructure is not in place. I've long thought that ubiquitous wifi would put an end to things like satalite radio. After all, why pay for a couple hundred stations when you could get every streaming audio channel in the world over the internet. The drawback was getting companies to build and people to buy wifi enabled devises to make it possible. Starting today someone IS building them and people will buy them by the millions without even knowing it! We will soon be doing all the things we have been promised for years , and who would have predicted we would be doing them on an iPod? Apple is positioned to dominate a market most people don't even know is coming. Brilliant. Note to self: buy stock.]

You know, Jambo, if you didn't get so caught up in how cool Apple is, you could probably edit your posts in digestible paragraph chunks. :-)

You're lucky I didn't post one giant run-on sentence! For what it is worth there was one more paragraph break in there that was left out just because I screwed up the html. I've put it back in but, yeah, I guess it is still a bit dense.

The post reflects the true Jambo. I remember the days with his first sony walkman. Think of a two year old with a new puppy.

I remember when they first launched this product in 2004 ... except it was called a "PlayStation Portable" and it played games, too.

I didn't think of the ecommerce applications of this, but I do think you are spot on Jambo. Brilliant stealth move that will only become obvious with a little more time.

What you're proposing is not a new concept, just something that the US for reaons unknown to me have never picked up on.

Look at the cellular services in Europe and the Pacific Rim. In those areas you can use your cell phone to make purchases.

Sigh. OK, I'll play. First of all, in a move that would bring admiration from a White House spokesman, Jambo is ignoring how on this bright and shining day, Jobs vigorously sodomized all his loyal acolytes and sycophants who with blind loyalty bought iPhones a few months ago for $600 bucks. That's right, he just dropped the price to $399. So all the insufferable Apple zealots that absolutely HAD to have an iPhone when it came out just got jobbed for $200.
Second, unless there's been a radical change that I haven't been hearing about, Apple is still using the legendary slow-as-molasses AT&T for its wireless service. I hear it makes one long for the days of a 52k dialup.
Yes, the commercial applications are endless and I credit Jobs for sneaking in something that might again change the world. But if you're standing with pants around your ankles while holding on to your $600 piece of black plastic you're probably not feeling real joyous right now. Jambo, back to you.

ROFLMAO. Apple has just announced a $100 "store credit" for those who got buggered on the original iPhone price. I will give them credit for caving quickly to the furor but I'd be asking for my other hundred bucks.

As far as the mobile payment thing goes, Google (I think as recently as this week) just patented a mobile payment technology based off text messages. This suggests that apple may not be early to the party, but just on time. Other similar thoughts have people thinking about using radio frequency to target advertisements within stores. If each shopper has a particular signal with their tastes, particular signs would light up indicating what they might be interested in. As far as a cash-less society, I think it is still a long way off. Cash is still far easier to launder, and people like Jericho can't be convinced to buy an I-phone, much less use it as a wallet.

Yep, no new technology here but that's not the point. Apple has put all the possibilities into something that millions of people are going to buy and also found a way to get them to use it. A coffee shop is the perfect way to get people into the virtual money mindset. There are other places where people spend more money but lots of people buy coffee every single day. Can you imagine if even 1% of Starbucks sales went thru a Mac account? I wasn't kidding about buying stock.

Some day a car maker is going to build cars with iPods in mind (I think some already put in docks for them to fit in the radio) and make an iPod the hub not just for recorded music but for radio, your GPS functions, and even your ignition key. All those toll roads that automatically deduct the fare when you drive onto them? Pay that thru your iPod as well. Or grant access to an HOV lane when two or more iPods are detected in the car. People way smarter than me will doubtless come up with a lot more ideas.

Here's one I just thought of. Door locks on your house keyed to certain iPods, say yours and your kids'. Got a housekeeper or babysitter coming over? Authorize their email address (I'm guessing that would be one way to identify people without creating a code) to open your front door but only during the hours you expect them to be there.

Nate, interesting point about Google. I had not heard of that. The question is how you get people to use your system rather than someone else's. That is a part of Jobs' genius.

As for Jerjo, he wouldn't use a white headphone cord as a tourniquet if his leg was severed. He's hopeless.

But if you're standing with pants around your ankles while holding on to your $600 piece of black plastic you're probably not feeling real joyous right now.

Jerjo, that guy tapping your foot with his iPhone under the stall divider was not asking you to piss on it.

I hear that AT&T data service is in fact awful but the iPhone also uses regular wifi connections as does the iPod. I wonder how many people opt for Skype when they have the chance?

Ya know, I've heard those white headphones. And it made the company-issued headphones TLR sound like a $300 pair of Sennheizers. But then when you're listening to bad 80s new wave like Jambo does, audiophile standards don't really matter.

Friggin' whiners. Did Motorola give back anything to anybody who bought a RAZR at $500?

Jambo, I've been reading your stuff for a year or so now and I think this is the first time I agree with you 100%. This is revolutionary. And not because it hasn't been done before (PSP) but because it has not been done well before. This will be truly usable. I can't wait until September 28.

I guess if you keep writing long enough eventually you get something right. I don't think this is happening overnight but it's coming and this is the start of it. I can't wait to pick one up myself but I know if I can hold off for a few months there will be one with more memory. Going with flash memory rather than a drive makes perfect sense for a portable but 16 GB is pretty small when you start using it for video.

tomorrow is macworld keynote day 2008 - watch for apple's announcement of this same concept. I'm betting it will happen on some level.